Website Wars: PrettyLittleThing vs Missguided vs ASOS vs Boohoo 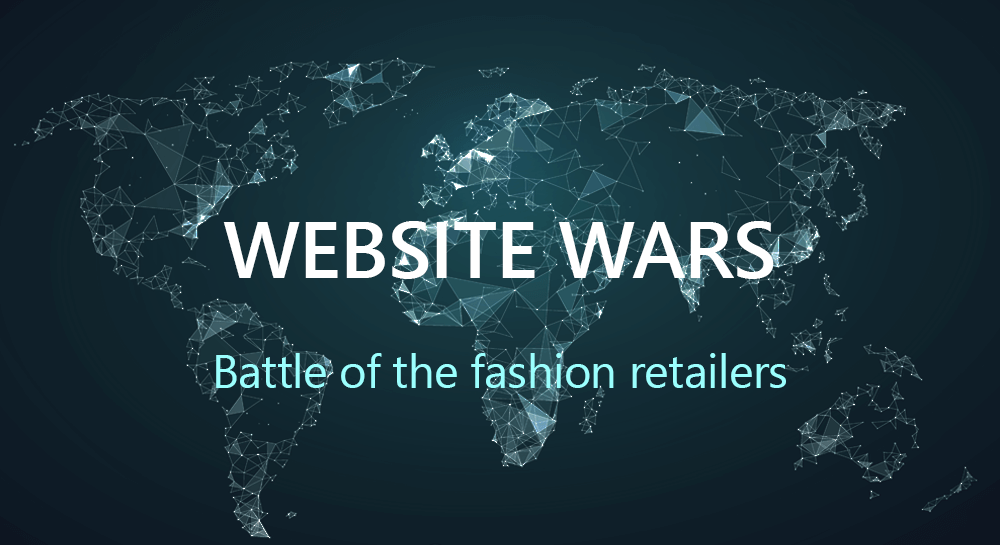 Covid-19 has had a significant impact on the world of fashion. In the US, clothing and accessories sales are down by more than 62% in physical stores, compared to last year’s figures. Within Europe, clothing, footwear and textiles sales were more than 50% below their 2019 level, for the same month.

In the UK alone, the clothing and footwear sector is expected to endure £14 billion in losses due to the coronavirus lock-down.

Within the online world, this impact has been less devastating – with some online fashion retailers actually experiencing a growth in sales. ASOS, for example, claimed sales in the four months through June 30 climbed 10% despite the pandemic, driven largely by growth in the EU along with rises in the US and some other markets too. Boohoo also reported a 45% rise in sales in the three months through May 31.

That’s not all. Clothes and apparel shoppers are increasingly turning to the online world, with ecommerce estimated to make up twice as much of fashion’s sales as it does for retail overall.

But are the world’s online retailers up to the job? In our latest research, we’ve compared four of the largest fashion retailer websites in the world: Boohoo, PrettyLittleThing, Missguided, and ASOS.

We assessed each site’s homepage based on its accessibility and compatibility across different devices and browsers. The winner of this battle is the one that performs best across these two tests.

The Accessibility Battle is a necessity, where visitors must be able to understand, navigate and interact with a website with ease. At Digivante, we perform accessibility testing to cover the many issues that may prevent or discourage disabled users from using or purchasing from your site.

For this assessment, we ranked the fashion retailer websites based on five key areas: Controls and Forms, Design and Usability, Interaction, Structure and Layout, and Multimedia Accessibility.

We usually use a range of test cases when we conduct accessibility tests for our customers. For this specific assessment, we chose one specific test case and ran it against each homepage of the three fashion websites.

Every site failed on one or more tests – Boohoo and Missguided failed in three areas, PrettyLittleThing failed on two counts and ASOS only failed on one.

All four sites failed in some way within the Multimedia Accessibility category – which is a surprising find given the reliance the online fashion world has on multimedia content.

Boohoo failed 3/5 tests in the Control & Forms, Structure & Layout and Multimedia Accessibility areas. Two errors were observed within its Control & Forms – where labels or instructions were missing and 18 link-related errors were revealed when assessing the site’s Structure & Layout. Within Multimedia, we observed 44 errors, mostly relating to non-text content and alt text.

Missguided also failed 3/5 tests across Control & Forms, Design & Usability, and Multimedia Accessibility. Labels or instructions were missing (for Control & Forms) and the product list carousel also did not display when CSS is turned off (within Design & Usability). We also observed six Multimedia Accessibility errors, relating to non-text, alt content.

For ASOS, the website only failed one test within the Multimedia Accessibility bracket. We observed just three errors where non-text content (alt text) was missing.

Result: with only one minor issue observed, we ranked ASOS first and PrettyLittleThing came a close second with two issues raised.

Both Boohoo and Missguided failed three tests but, for Missguided, one of these was only an AA standard. So, we ranked Missguided third and Boohoo in last place.

We examined the performance of each website. These compatibility tests check that a website can function across a range of different devices and platforms, to check whether the site provides a consistent user experience.

For this assessment, we selected five popular smartphone devices and four web browsers, running the same test case. For this test case, a guest user navigated to the homepage, sales page and a product page.

These compatibility tests split the sites down the middle. ASOS and Boohoo passed 8/9 tests but PrettyLittleThing and Missguided only passed 5/9 tests.

For Boohoo, the site’s “Clearance Sale” section missed information when viewed on the Microsoft Edge browser.

For ASOS, the homepage hero image appeared in low resolution, when observed on a Samsung S9 device.

For PrettyLittleThing, the drop-down button overlapped with the text on the Sales page and the ‘Share’ button didn’t do anything, when clicked on the Product page. These issues were observed across four devices.

For Missguided, product names and prices were not aligned on the Sales pages and some text was not visible when viewing the site on specific devices. We also observed issues when using different browsers. There was an area of empty space on Internet Explorer 11 between the images and CTA, and text overlaying the information on the Sales page on Microsoft Edge.

And the winner is…

Coming first in both the accessibility and compatibility categories, it probably comes as no surprise that ASOS is ranked as our top online fashion retailer.

Missguided came third in both test areas pushing it to fourth place overall.

This test provides a snapshot of the many, different testing services we offer at Digivante. With our community of tens of thousands of carefully managed and vetted professional testers, working in 149 countries, we can test your website and online applications, evaluating your conversion paths, online launches and new functionality to make sure everything works first time, every time.